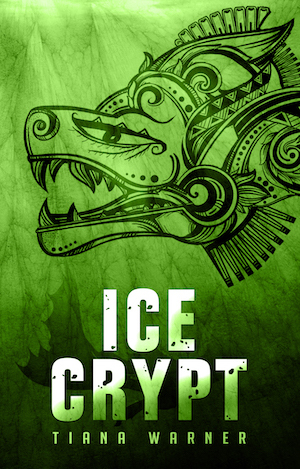 First, let me just say that I’m perplexed about why more YA fantasy book lovers are not reading this series. It is so fun! Okay, I kind of get it. Some people are into mermaid stories; some aren’t. I honestly had no preference either way. I just really love these books. Yes, they’re written by an indie author, but they’re as good or better than some of the more popular YA fantasy series, very professionally done, strong writing, no typos, etc.

So here’s the  setup:

Human inhabitants of the island of Eriana Kwai are mortal enemies with merpeople/sea demons who are starving out the islanders and killing fisherman under the leadership of an evil, power-hungry mer-king. In book one, we get to know Meela, a human girl, who forms a strong bond of friendship with Lysi, a mermaid, when they’re both young girls. Then Meela and Lysi grow up to become warriors and have to do battle with each other. In book #2, Ice Crypt, we get to know Lysi better, and we witness what appears to be a blossoming love affair between Meela and Lysi.

Some things that make Ice Crypt so good:

Lysi’s merman comrade in arms Spio is the most endearing kind of goofball, like when he says to Lysi: “She reminds me of what you would look like if you were ten years older and had dark hair. And darker skin. And bigger—”

[Lysi interrupts to say] “So she looks nothing like me.”

In Ice Crypt, Meela and her human friends experience fascinating adventures on the island, but Lysi the mermaid steals the show. Lysi is a brave, stubborn warrior with a kind heart and lots of attitude, like this observation she makes about a pompous merman who keeps following her around (even though she only has eyes for Meela):

This guy projected so much confidence that I had the urge to swat it away. . .

For anyone who enjoys YA fantasy, I highly recommend this series.

2 thoughts on “Why are More People Not Reading this YA Series? It’s So Good! Ice Crypt by Tiana Warner”