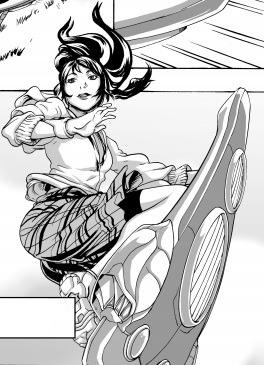 I wish I were hoverboarding right now above the river, the wilderness, and the Rusty Ruins just like Tally, the protagonist in Uglies, which I am currently reading (my first Scott Westerfeld novel).

Sometimes life gets so crazy busy that even things that are important to me, like blogging, have to get shoved to the side for a while. There are so many things I want to do in life. Unfortunately, a day job is one of them. I like being a teacher, but I’m in a place right now where I truly, honestly feel that writing full-time is what I need to be doing. But tell that to my bank account.

The good news is I continue to grow and learn as a writer. I’m still mastering the art of completing a polished novel, but with every novel I write I get better and closer to proving to myself (and hopefully to the world) that I have what it takes to make it as a professional writer. I’ve made friends in the writing community, people so far removed from my daily life it’s kind of funny, like I have an alternate life. Which I guess I kind of do. To the rest of the world I’m mom, wife, teacher, friend, errand runner, whatever. But then there’s this inner world apart from all that in which I’m the chick who’s busting her tail to become a successful published author. There are lots of dues to pay.

I try to squeeze in writing 500-100 words however I can each weekday and then several thousand more on Saturdays and Sundays. A full-time teaching schedule, then a part-time job after school (teaching at a private school and Southern California’s cost of living do not see eye to eye), then tending to family and home doesn’t leave time for hobbies, except for reading, which of course is like calling breathing a hobby.

One of the only TV shows I have time for is Broad City, which is an effing hilarious show. Genuinely funny women being bawdy and crude makes me happy.

My husband also recently turned me on to a show on Netflix called River, which is pretty great.

All the characters in the series look like real people–a television trend I adore, and it has an intriguing paranormal theme, too. Detective River talks to ghosts who help him solve crimes, kind of like a darker, much more British (it’s set in London, yay!) Medium (remember that show with Patricia Arquette?) The acting is excellent. The writing is, too. In fact, one scene brought tears to my eyes, when River, the downtrodden, ghost-seeing, expert detective says:

What was it about this line that got me so choked up? Of course, there was something about what he said that I related to, as in we have things about ourselves that we know are smart or clever or special, but people don’t always see them. The charming people who walk with the most confidence seem to get a lot. People like me who bust our tails don’t necessarily get recognition unless we also know how to play politics. That exhausts me.

Give me writing, reading, and talking to people who love those things, too. And a hoverboard.

In pursuing my ambition to publish great YA novels, here are some things I learned over the past year:

Thank you to the ever-classy Caitlyn @ Rhodes of Reading for nominating me for this  Infinity of Dreams Award. Caitlyn is a teacher who adores YA fiction, so of course she’s one of my favorite peeps.

1. Thank and follow the blog that nominated you
2. Tell us 11 facts about yourself
3. Answer the questions that were set for you to answer
4.  Nominate 11 bloggers and set questions for them

Eleven Facts About Me

The truth? I feel on the verge of tears today.

Because of a dream.

Or, rather, because of feelings the dream evoked.

In the dream, I flit around the house getting ready for work. From the other side of the closed bathroom door, my mother (the one who raised me from the time I was an infant) says, “I’m here.”

And her voice is smiling.

The realization shocks me awake. I had forgotten my mother’s voice could smile.

Because in my life I have so rarely heard it.

I should call her, I think.

When I was seventeen, I moved out of my parents’ house, and I made it a point to call and check in a few times a year and send my mother a card on her birthday.

My mother has never acknowledged my birthday.

On the rare occasions that I mention to close friends how volatile being raised by a depressed, rage-filled mother could be, they ask me why I’m not more resentful.  (I’m not sure.) If I’m feeling particularly safe and confessional, I’ll reveal my mother’s most extreme behavior: ignoring me for days when my father was away on business; cornering me in a bathroom wielding a knife; dragging me from the house by my hair saying she was taking me back to the adoption agency. And even more rarely, I might tell a friend how, at the age of ten, I broke down the bathroom door to scoop up my petite mother, barely conscious, and walk her around the house like I’d seen people do on television shows when someone attempts suicide through overdose.

And I continued to cower, or rage silently, or try to be perfect, all the while still feeling compassion for her because, even as a child, I knew how broken and fragile she was beneath her rage. Between bouts of fending off her screams and blows, I nurtured her.

I’ve been told that, as a coping mechanism, abused children develop a sort of situational amnesia, like soldiers with post-traumatic stress disorder. I know this to be true.  I block out bad things even without meaning to, sometimes when I don’t want to, and out with bad memories often go good ones.

Like the way my mother’s voice could sometimes have a smile in it, the way that tiny, shiny part of her soul could occasionally peek out despite her own traumatic childhood. Pretty mother primping in her vanity mirror, combing black hair back from her heart-shaped face, revealing her widow’s peak; applying foundation and deep red lipstick. Talented mother singing, dancing. Fiery mother tearing up playing cards when Dad managed to (finally) beat her in a game of gin rummy. And my favorite: gentle mother who sang me to sleep with a Japanese lullaby while stroking my hair.

My dream made me remember good things.

The cruelty I suffered at my mother’s hands.

My guilt over only calling her once after she severely injured her knee in a fall a few weeks ago.

So this morning, after the dream, I called my mother: eight o’clock California time, midnight Japan time. A television played in the background, and my mother sounded distracted. But we spoke.

I made my call as the dutiful daughter.

And I still feel on the verge of tears.