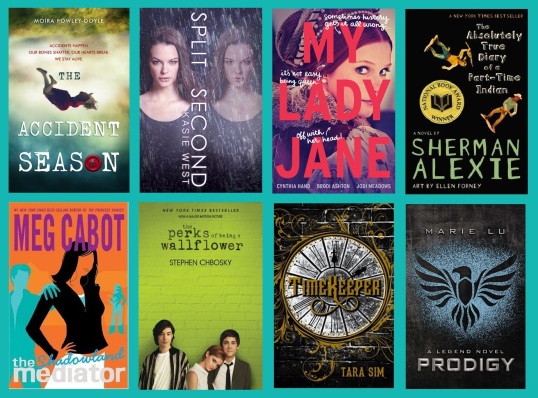 Hello, fellow book junkies! Can you believe we’re already on the home stretch toward Christmas? Wow, this year is absolutely flying by. So how was your reading month? Though there weren’t any five-star reads, mine was perfectly enjoyable. All the books I read fell into the YA category (unsurprisingly, since I love it so much) . The narratives took me all over the place, from My Lady Jane’s alternate 16th century England to The Absolutely True Diary’s Spokane Indian Reservation and all points in between and way not in between.

YA Paranormal, Modern Day Texas & Fantasy Compound Where People with Special Powers Live
Split Second (Pivot Point #2) by Kasie West 360pp
Kasie West is a fine writer; when I read her books I know I’m in good hands. However, I may be the toughest critic when it comes to sequels. What made the first book in this series so enjoyable was the thrill of going along for the wild ride as main character Addie, using her Searcher ability, mentally lives out two potential futures based on two different choices. This happened hardly at all in the second book; thus, I didn’t enjoy it quite as much. 4/5 stars

YA Paranormal in a Modern Day Northern California Catholic High School with a very angry ghost
Shadowland by Meg Cabot 287pp audiobook
I’m always up for a story about a protagonist who can see ghosts. This book wasn’t bad, just the plot was a bit thin. It would have been better so much better if more things had happened. 3.25/5 stars

YA Paranormal(ish) in Modern Day Ireland
The Accident Season by Moira Fowley-Doyle audiobook
Smalltown Ireland was a fantastic setting. This is one of those frustrating books that’s so well-written, with such a promising concept, but a plot that does not deliver. 3/5 stars

YA Contemporary/Humor on Spokane Indian Reservation
The Absolutely True Diary of a Part-Time Indian by Sherman Alexie
Humorous and heartbreaking, this was an eye-opening journey into the life of an incredibly bright boy on an Indian Reservation in Spokane, Washington. The author’s illustrations were a nice touch. 4/5 stars

YA Alternative Historical Romance in 16th Century England
My Lady Jane by Hand, Ashton & Meadows
I’ve never read a book quite like this. It was irreverent, entertaining, and impeccably well-researched. 4/5 stars

YA Steampunk in Alternate England
Timekeeper by Tara Sim  Netgalley ARC
This was my first foray into steampunk, a genre I’d be interested in reading more of. Timekeeper had lots of potential. My favorite character by far was Daphne, but she really didn’t have a very big part. The main character, Danny, was sweet and tortured, but I never really feel like I got to know him. My full Goodreads review is here. 3.75/5 stars

YA Dystopia in Post-Apocalyptic Denver
Prodigy (Legend #2) by Marie Lu
I adored the first book, Legend. Book two kept my interest throughout but didn’t have the heartpounding, non-stop action that the first book did until about 2/3 of the way in. The Colonies alluded to in the first book are revealed in the second, and Marie Lu’s take on them is quite interesting. There are three more important things I want to say about Prodigy: Kaede, Kaede, Kaede. 4/5 stars

YA Contemporary/Coming of Age in 1990s Pittsburgh
The Perks of Being a Wallflower by Stephen Chbosky  audiobook
Yay, I finally got around to reading this modern YA classic. Now I can see how true to the book the movie was. No wonder–wow, did Chbosky really write and direct the movie based on his own book? What a multi-talented guy. 4.25/5 stars