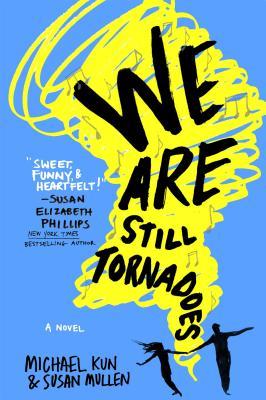 Newly out this month from St. Martin’s Griffin is a YA contemporary penned by co-authors Michael Kun and Susan Mullen called We Are Still Tornadoes–a quick, feel-good read.

Set in the 1980s, We Are Still Tornadoes takes us into the relationship between lifelong friends Cath and Scott through letters they write to one another after Cath moves away to college.

As someone who also grew up with a dear friend of the opposite sex (coincidentally, also named Scott), I appreciate how authentically Kun and Mullen capture the open, honest, sometimes goofy, sometimes flirtatious friendship between a girl and a boy.

Cath, Scott and their shared history are totally believable. Scott is very funny. Cath is more cerebral but can hold her own in the humor department. Both are genuinely good people navigating the turbulent seas of post-high school life. They make mistakes, deal with social faux pas, encounter tragedies, and through it all we root for them.

We Are Still Tornadoes’ only weakness is its ending, which would have benefited greatly from more of a build-up and a denouement. No joke, when I arrived at the last page of the story, I kept tapping my e-book screen thinking there had to be more–but nope. Despite the rushed ending, We Are Still Tornadoes is definitely worth the read and deserves a hearty four out of five stars.

9 thoughts on “NEW YA Book Review: We Are Still Tornadoes #amreading”